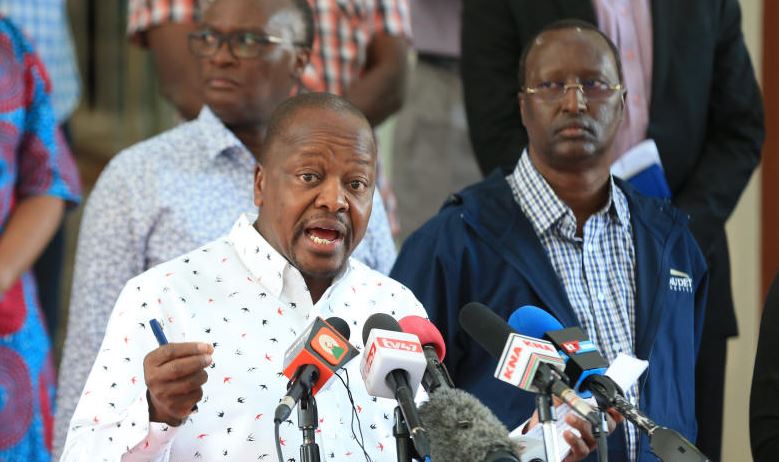 Eight new cases of coronavirus have been confirmed in the country, bringing the total number of patients to 15. This came as the government suspended all international flights among a raft of radical measures to check spread. Government agencies are also looking for 363 individuals said to have been in contact with the eight. They will be quarantined and tested to determine if they are infected.

The eight new cases comprise five Kenyans and three foreigners - two French tourists and one Mexican. They have been confirmed in the last 72 hours. Health CS Mutahi Kagwe (pictured) said yesterday the new cases are all imported. They arrived in the country between March 4 and 17, 2020. They are aged between 20 and 67. “All patients, except the French tourist who is in Msambweni Hospital, are in stable condition. The government is organising to have him transferred to Nairobi,” he said. Due to the severity of the matter, which appears to be all linked to outside travel, the CS, who is also the chairman of the National Emergency Response Committee (NERC), suspended all international flights. The directive takes effect on March 25, 2020 midnight. Only cargo flights will be allowed in.

“Those coming into the country between now and Wednesday will undergo mandatory quarantine at a government designated facility at their own expense,” he said. Kagwe said countries wishing to evacuate their nationals must make arrangements to do so within this period. “Kenyans who are currently in foreign countries and will not have come back within the period are advised to observe the guidelines issued in the respective countries wherever they are,” he said. He noted that whereas an earlier Executive order had allowed Kenyans and foreigners with valid residence permits to come back, the government had noted that there were those who were not observing the self-quarantine protocol. “Consequently, NERC has decided that all persons who violate the self-quarantine requirement will be forcefully quarantined for a full period of 14 days at their cost and thereafter arrested and charged under the Public Health Act,” he said.

The CS, referring to the case of Kilifi Deputy Governor Gideon Saburi, insisted that the directive on self-quarantine was mandatory. “All persons violating the self-quarantine directive will be forcefully quarantined in government facilities. This applies to the senior government official from Kilifi,” he said. The said official had been in Germany for a work-related trip and refused to isolate himself for 14 days as the government had directed. The CS further ordered that effective midnight tonight, all bars will remain closed until further notice. Restaurants, however, are to remain open, but only for purposes of facilitating takeaway services. This is meant to secure the social distance requirement and reduce the risk of transmission in these facilities.

Kagwe said all public service vehicles must adhere to the directive issued on March 20 to reduce the number of passengers they carry, failure to which the respective sacco licenses will be revoked. “The Inspector General of Police has already been directed to enforce this directive,” he said. The directive will have 14-seater matatus carry eight passengers, 25 seaters will carry 15 and 30 seaters and above will carry not more than 60 per cent of their capacity. Kagwe said the government had noted non-compliance of religious institutions to the social distance requirement and consequently directed suspension of all gatherings in churches, mosques and other religious organisations. “This also includes weddings, funerals and other social gatherings which are restricted to immediate family members. These directives take effect immediately until further notice,” he said.

Funerals are limited to 15 bereaved family members. The CS, who was accompanied by IG Hillary Mutyambai and Interior PS Karanja Kibicho, said he will not allow greed by some clerics to drown the country in a catastrophe. Mr Kibicho directed all regional and county administrators, including chiefs and sub-chiefs, to ensure the directives on gatherings are implemented failure to which they will face disciplinary action. Kagwe said he will not allow Kenya to go the Italy way whose death toll now has surpassed China with 4,825 cases. Of these, 789 were recorded in just 24 hours.