Mount Kenya Foundation (MKF) leaders have announced they will unveil their preferred presidential candidate at a retreat in Limuru.

MKF made the disclosure yesterday as they fought claims that they had settled on ODM leader Raila Odinga on a day One Kenya Alliance (OKA) principals made strong pitch for their respective candidature.

The businessmen and politicians challenged the opposition leaders to present a united front in the next poll to avoid splitting votes in what may work in favour of Deputy President William Ruto.

DP’s rallying call to voters in his Rift backyard: Do not let me down

MKF has been vetting the 2022 presidential hopefuls reportedly with the blessings of President Uhuru Kenya, who is also keen to have the opposition leader work together in his succession race.

The Foundation Vice Chairperson Titus Ibui said that the region was yet to settle on a candidate and would retreat to deliberate before announcing the presidential hopeful they will back in 2022 General Election.

“As Mt Kenya Foundation, we have no preferred candidate. We have given you (OKA principals) the key to walk to Mt Kenya and convince the people,” said Mr Ibui.

Ibui made the remarks after the leaders told the Foundation that they risk bungling the succession race by having a preferred candidate.

They said that any perceived feeling of unfairness in settling on a candidate by the region may trigger revolt among the opposition chiefs.

“First of all, let us not have a preferred leader. All these people are capable. Let all of us work as a team, and at the right time Kenyans will see who is the most qualified to take us through this very risky period,” said Cyrus Jirongo.

“If you come fronting somebody else who maybe has just voted for you once not because he wanted to work for you, but circumstances forced him to vote for you and us who voted for you because we believed in you,” he added in a jibe targeted at Raila.

Gideon said it was only by fronting a united team that they will be able to form the next government and ensure implementation of economic blueprints that can improve the economy.

The Kanu chairman reiterated that it was by ensuring unity and peace that there would be conducive environment for people to do business.

“We understand that we need a consistent tax policy and you'll be very surprised to know that in Kenya today we do not have a tax policy. You need a predictable tax policy; you don't want tax policies that come in like what happened with the fuel prices,” said the Baringo Senator.

Kalonzo said he has stood with Mt Kenya in its lowest moment, revisiting his role in helping former President Kibaki in the aftermath of the disputed 2007 presidential election.

He further claimed that he convinced Kibaki to appoint Uhuru as a deputy Prime Minister in the grand coalition government.

“In 2007, people who represent the mountain came to my house to plead with me and we reasoned together and if we had not reasoned together, the country would have been worse than Somalia,” said Kalonzo.

The Wiper leader, however, maintained that he does not believe in political debts and would not demand for support from President Uhuru.

Earlier, MKF chairman Peter Munga revealed how they unsuccessfully tried to prevail upon Kalonzo to drop his presidential bid in 2007 in favour of former President Kibaki.

Munga disclosed how alongside the late business mogul Chris Kirubi and Equity Bank boss James Mwangi they spent hours trying to convince the Wiper leader to drop his bid.

“We wanted a bigger margin, so we asked him to step down in favour of our preferred candidate. But he refused saying that the decision would have killed his future ambition,” he said.

“Without him it was going to be extremely difficult for Kibaki to form the government because he didn’t have enough Members of Parliament,” he added.

The Wiper party leader garnered at least 800,000 votes coming a distant third after Kibaki and Raila in the presidential race whose outcome was contested and triggered chaos.

Kalonzo was later picked by Kibaki to serve as the Vice President in the grand coalition government that had Raila as the Prime Minister.

Mudavadi told the Foundation that its decision on the preferred presidential candidate should be influenced by logic and not the might of individual players.

He said the vetting by MKF gives opportunity to those seeking leadership positions to share their agenda.

In a jibe targeted at Ruto, the ANC party leader said Kenyans need a thriving nation and not a hustling one.

He said he will ensure farmers are paid promptly for their produce and proper remuneration for teachers and police officers.

“We must allow business to grow, and we give them the necessary support for them to grow. This is the agenda that we should be talking about as a country,” added the ANC leader.

Senator Wetangúla lauded the Mt Kenya leaders for seeking to support an outsider for the top seat having produced three presidents.

He said he was ready to back any opposition leader since all of them are capable of taking over the country after Uhuru’s term ends.

“Mt Kenya brothers and sisters are very lucky. You have produced three presidents for our great Republic. I'm very happy when among you and your team that this time around you've come to a very positive realisation that this country has many communities, many regions, and is desirable to rotate and share opportunities of leadership,” said the Ford Kenya leader.

“We are tried and tested. We are proven. We are trusted, and we can deliver. We have a trail blaze of deliverance. And I want to tell you that when we go to the next elections, don't be over awed about what is going to happen," he added

Ibui warned that Mount Kenya stands to lose if OKA principals go separate ways since they have supporters in the region.

“There are attempts to divide Mount Kenya into Kieleweke and Tangatanga. We are also here to talk about the unity of Mount Kenya and the entire country in general,” he said

The compulsory Teachers Professional Development (TPD) training will continue as the case filed at the High Court proceeds to hearing.

Why Prezzo UK was bound to be Pandora Papers ‘whistleblower’

Welcoming the lifting of the lid on what’s now known as “Pandora Papers,” he said this revelation would go a long way in exposing illicit cash flows. 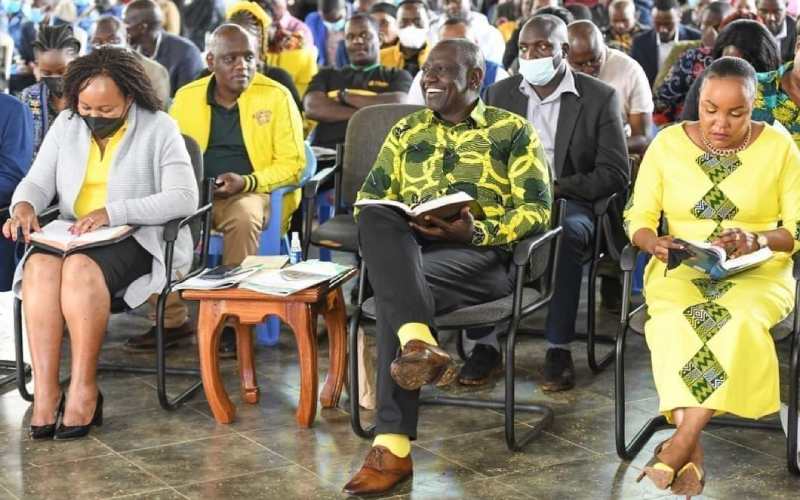 By Ndung’u Gachane and Jane Mugambi | 8 minutes ago

By Jacob Ng'etich and Erastus Mulwa | 43 minutes ago

By Erastus Mulwa | 2 hours ago

By Ndungu Gachane | 5 hours ago