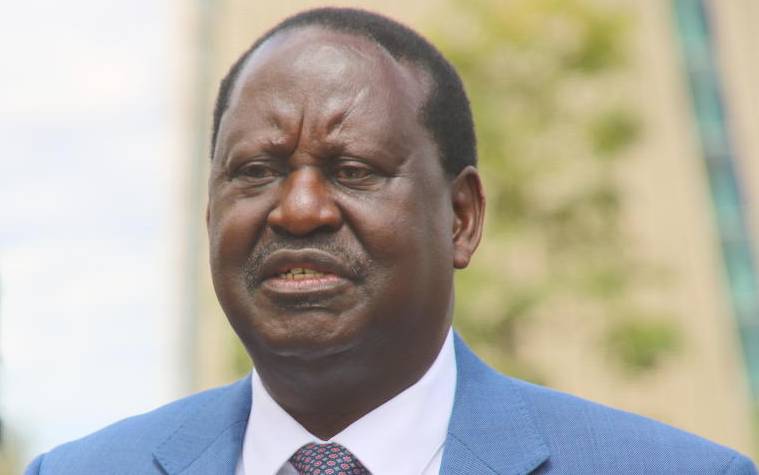 Opposition leader Raila Odinga’s ODM party is working towards a pre-election coalition agreement with the ruling Jubilee party. The political development suggests the party is seeking President Uhuru Kenyatta’s endorsement for its 2022 presidential candidate – most probably Raila (pictured above)– considering Uhuru is not eligible for another term. ODM chairman John Mbadi yesterday told The Standard that the two parties were already building consensus for the deal, which he said will be signed in the run-up to the next polls.

The Orange party has resorted to a pre-election deal as opposed to post-election coalition agreement signed by others to avoid being stripped of the Minority positions in Parliament. “As a party, our priority is not a post-election deal with Jubilee but pre-election coalition ahead of the 2022 General Election. We are focused on building consensus to have a big team. We are going to sign a deal with Uhuru and other like-minded partners. Uhuru is building his support and ODM as a big party is doing the same,” Mbadi said. “We will come together at the appropriate time. The kind of arrangement we have with Uhuru now is enough, which is to help him run his agenda, and for us to bring Kenyans together and achieve reforms. ODM is consulting presently within its ranks. The party is not for a divided nation, but want it healed before we can enter into a serious coalition agreement,” he added. The decision comes on the backdrop of a post-election coalition agreement by the independence party Kanu under Baringo Senator Gideon Moi with the ruling party, an endorsement by Wiper Party’s National Executive Council for a similar deal and a cooperation agreement by Isaac Ruto’s Chama Cha Mashinani (CCM). The push to seal the deals are fuelled by the fallout between Uhuru and his deputy William Ruto, which the parties seek to exploit to win the president’s endorsement come the next poll.

The rush to work with Uhuru has given him an easy time to push his legacy agenda as well as manage the succession politics without the distraction of fierce opposition that an incumbent often faces. It is, however, likely to present him with a major headache in settling on who to back to succeed him when that time comes. The late President Moi faced a similar dilemma when he accommodated Raila and other politicians with presidential ambition. His decision to back Uhuru for 2002 polls triggered a rebellion that saw Mwai Kibaki win the poll with the backing of Raila, Kalonzo, the late Minister George Saitoti, among others. In the run-up to 2013 elections, Kibaki did not publicly endorse anyone. Raila, then prime minister and Kalonzo, then vice president, teamed up to face off with then deputy prime minister Uhuru, who ran on a joint ticket with William Ruto and won. Yesterday, Kalonzo said the party’s decision to go for a post-election coalition was part of its strategy to form the next government.

He described the National Super Alliance (NASA) as moribund and of no future use for a party keen on capturing power. “We are also open for a pre-election deal for purposes of 2022 elections. The party is positioning itself to take the leadership of this country with other coalition partners,” Kalonzo told The Standard. “NASA is currently dysfunctional. Again we cannot belong to two coalitions at the same time, so we have to exit. During the by-election in Kibra, ODM Secretary-General (Edwin Sifuna) was very loud that NASA is dead. I have personally tried to save the coalition by reaching out to Raila and the other partners,” he added. Kalonzo explained that after signing the cooperation agreement with the ruling party last month, the party members demanded for a coalition pact. “We signed a cooperation agreement but people said we go the whole hog. This time we are going to set the stage. We are not going to follow what other parties do, but they will follow what we do,” he said. Kalonzo also indicated that the party was exploring consensus with the coalition partners to ensure its members retain the Minority positions, arguing that “following the handshake, ideally there is no Majority and Minority sides”. Kanu Secretary-General Nick Salat yesterday said the party was part and parcel of the ruling party and was working to help Uhuru achieve his legacy projects. Salat said any other party joining the ruling coalition must queue behind them, signalling the pending battle for Uhuru’s support. “When we signed the coalition agreement, Kanu was actualising an existing relationship by getting to be part and parcel of Uhuru’s legacy. Whoever comes now will have to join the queue,” said Salat. He said the party has trained its eyes on the top position to be created by the Building Bridges Initiative (BBI). “We are not taking things lying down this time. We are not in the endorsing mood, we will go out and square it with those eyeing the top seat. We will adjust our ambition and go for the top seat that BBI will create,” he added. But Ruto allies yesterday said it would not be a walk in the park for the new allies of the ruling party, daring them to dissolve their outfits and prepare to battle for the ticket with Ruto. Aldai MP Cornelly Serem said it was not about Uhuru’s endorsement, but the voters’ decision. He said Uhuru’s two wins was a collective effort by Jubilee leaders who went out to drum up support for him. “We know they are coming for endorsement, but they should be reminded that it is the people who will decide. We went out and asked for votes and the people supported us,” said Serem. “They are coming in as visitors; they cannot dictate to us who to fly the party ticket. If they are man enough they should dissolve their parties and merge with Jubilee,” he added. Amani National Congress (ANC) leader Musalia Mudavadi and his Ford Kenya counterpart Moses Wetang’ula, however, said it was premature to enter into coalitions two years to the next poll. The two leaders said formations for the next poll will come one year to the general election. “For one to enter into a new coalition they have to exit the one they are in at the moment. We still have a long way to the next elections. There are two more years,” said Mudavadi. “We as a party will make our own decision when we think it is appropriate. Certainly we will have to form alliances because even the constitutional provision is that you have to reach out to other regions for you to get the required votes,” he added. He made the remarks in the backdrop of a series of high-profile political meetings with leaders from other regions. He recently hosted Narc-Kenya leader Martha Karua and 2013 presidential candidate Peter Kenneth. Wetang’ula said his party’s focus at the moment was to consolidate its primary support base of Western Kenya before getting out to woo other leaders. Too early He said it was too early to sign pacts, describing the country’s politics as fluid and continues “shifting like the sands of Kalahari Desert”. He accused ODM of continuing on two paths by enjoying trappings of the opposition and those of government through association with Jubilee. “Political alliances shift in Kenya like sand in the Kalahari Desert. The issue now is not to form alliances, but to consolidate our support base for future alliances,” said Wetang’ula. ODM’s Sifuna, Treasurer Timothy Bosire, Homa Bay Woman Rep Gladys Wanga and Ugunja MP Opiyo Wandai yesterday said the party will continue operating under the handshake framework until the right time for the deal. In an apparent bashing of ANC and Ford Kenya, Sifuna said the party will only enter into coalitions with parties enjoying support in areas they have not penetrated politically. Wandayi, however, said Kenyans should stop unnecessary pre-occupation with matters 2022. Wanga noted that the handshake was yielding the intended results, stating that they will continue operating under the current framework to push for reforms.