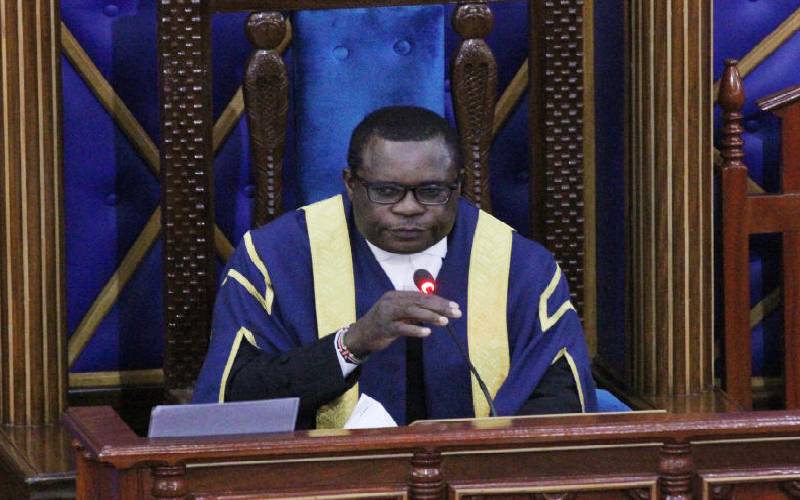 Talks to try and reach a compromise on a disputed revenue sharing formula flopped yesterday prompting the postponement of a vote in the Senate. Last-ditch efforts to strike a deal on the contentious third-generation formula of revenue sharing among counties hit a snag, prompting Speaker Ken Lusaka (pictured) to once again defer the crucial vote that seeks to avert a looming financial crisis in counties. The development sent President Uhuru Kenyatta’s administration, which backs a new formula that puts a premium on each county’s population, back to the drawing board.

It further delays the passage of the County Allocation of Revenue Act, 2020, which is required before counties can begin getting their share of national revenue. The Standard reliably learnt that efforts by senators allied to Uhuru to convince their colleagues opposed to the contentious formula proposed by the Commission on Revenue Allocation (CRA) failed to bear fruit. Yesterday, the Senate Business Committee chaired by Lusaka tasked a small ad hoc committee to broker a deal, which could have resulted in a win-win situation by 1.30pm. This did not happen. The committee failed to agree on the best formula but maintained the status quo meaning the current formula still stands. Senator George Khaniri had raised the matter with the Speaker in the House after noting that the matter was not appearing in the Order Paper.

“The biggest thing Kenyans are waiting for from this House today is to see if we will agree on the formula for sharing of revenue. The country is anxiously waiting for the outcome of this debate,” Khaniri said on a Point of Order. “I came from my house knowing that this is what we are going to discuss. I have looked at the Order Paper and I don’t see that item,” he said. Lusaka acknowledged the Senator’s concern. “The Leader of Majority Samuel Poghisio will be seeking to move a motion to adjust the calendar so that the matter is concluded on Thursday,?” announced the Speaker. The development yesterday signals a possible paralysis in counties as senators take hardline stands despite whipping by Uhuru and Opposition leader Raila Odinga.

Those opposed to the formula want the status quo retained until counties get additional allocation. The House committee, which includes Deputy Speaker Margaret Kamar, Majority Whip Irungu Kangata and his Minority counterpart Mutula Kilonzo Jnr and Senator Ledama ole Kina sought to introduce an amendment, which did not yield consensus. “This is a dangerous formula as nothing will stop the government of the day from slashing allocations in future,” said Tharaka Nithi Senator Kithure Kindiki, a leading voice among senators opposed to the formula. Kindiki, whose county stands to lose more than Sh400 million, said the fight for billions of shillings to go to counties was meant to strengthen devolution. Senator Kilonzo Jnr, whose county stands to lose Sh500 million, said senators want to ensure counties get the same allocation as the previous financial year. “We seek to retain the shareable revenue as it is since the revenue is the same at Sh316.5 billion,” he said. Elgeyo/Marakwet Senator Kipchumba Murkomen, whose county stands to gain Sh330 million in the proposed formula, called for a speedy resolution of the impasse. “The issue of the formula must be revolved expeditiously and amicably to avoid delay of services in counties or disenfranchisement of any county,” said Murkomen. Senator Kangata downplayed the stalemate, insisting that negotiations are still on. “Negotiations are ongoing. The progress has been positive. A small informal ad hoc committee has been set up to fine-tune the proposals,” stated Kangata. ODM chairman John Mbadi (Suba South) said the party has not taken a position on the matter. “We must build a consensus,” said Mbadi.