With only four days to elections, President Uhuru Kenyatta has lined up tours across the country that pales in comparison to any other moment in his ten-year tenure.

President Kenyatta has in five days crisis-crossed five regions, held more than 30 meetings and addressed rallies, earning himself a medal for Kenya’s most active outgoing president.

In his final days in office, Uhuru is conducting an average of five meetings daily with a few more at night, according to sources.

President Kenyatta is keen to secure his legacy and his forays across the country are primarily to launch projects laced with heavy politics.

From tours in Nairobi, Mt Kenya, Rift Valley, Nyanza, Western, Kisii, and today in Coast, President Kenyatta has literally covered six of the former eight provinces with tens of projects commissioned in a few days.

His predecessor, the late Mwai Kibaki took a low profile and did not attend many functions during his last three months in office, instead confining himself to State House, Nairobi.

In 2002, after actively campaigning for Uhuru, President Daniel arap Moi spent his last month in office meeting with government officials to plan his succession after 24 years in power.

A month before the election, Moi publicly asked for forgiveness from those he had wronged during his term and also forgave those who had wronged him.

But Uhuru is commissioning mega projects in his last days in office. On Tuesday, he awarded charters to eight universities, half of them public and the rest private institutions.

“The Head of State and Abagusii leaders are expected to discuss a wide range of subjects among them the progress of government development projects and the region’s political choices in next week’s elections,” State House tweeted.

Uhuru will tomorrow be in Kilifi and Lamu where he is expected to unveil more projects, including the Dongo Kundu Special Economic Zone (SEZ) and inspect the Lapsset project.

During the Western tour, the president inspected progress of the revival of Nzoia Sugar factory and promised Sh500 million bailout to offset arrears owed to farmers and workers.

He said Sh450 million owed to farmers will be credited to their bank accounts while Sh50 million will be paid to factory workers by Friday.

During the tour of Kisumu on Monday, the president inaugurated Kenya Shipyards Limited and witnessed the floatation of the refurbished 1,800-tonne MV Uhuru II wagon ferry.

Earlier, he had presided over the issuance of 14,000 title deeds to residents of Kiambu at Kamangu Primary School grounds in Kikuyu, commissioned Karimenu II Dam in Gatundu North Constituency.

“We know most of the functions and forays are meant to campaign for Raila. The freebies he is awarding to the people are meant to hoodwink them to vote for the Azimio presidential candidate. He realised his projects are not selling across and he is boosting the campaigns,” said UDA presidential running mate Rigathi Gachagua.

Gachagua said Uhuru had realised too late that his Azimio candidate was not popular and he was now engaging in last-minute campaigns for him.

But Kiambu MP Jude Njomo defended the president, insisting he had the right to ensure the projects he had started were completed and the ongoing ones, fast-tracked.

“He is still the head of state until he hands over power. During this time he is free to visit everywhere he wants and commission, inaugurate or open any project. He is also free to tell Kenyans who is better placed to continue with his legacy,” said Njomo. 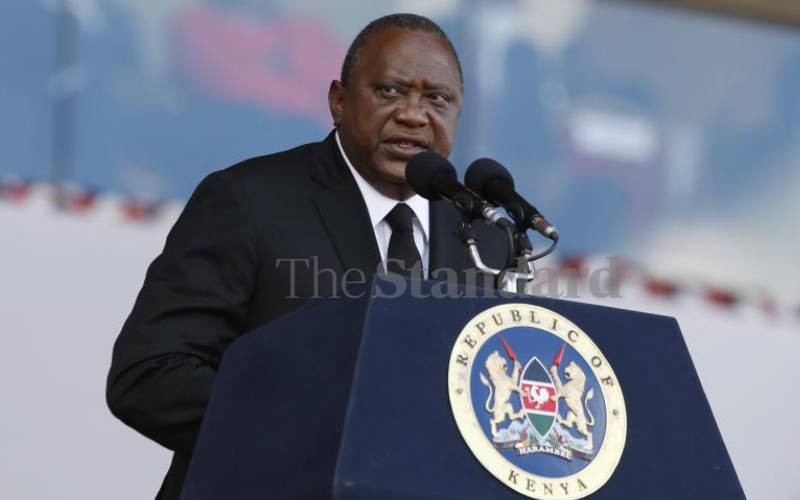 Premium Uhuru: Lame duck President?
President Uhuru Kenyatta is finally laying the speculation about the role he will play in succession politics at their prime.
Politics
By Allan Mungai
23 days ago

By Patrick Muinde 1 hr ago
Premium Has Jubilee administration delivered?

By Daniel Wesangula 1 hr ago
Premium Voting: Why Kenya needs you