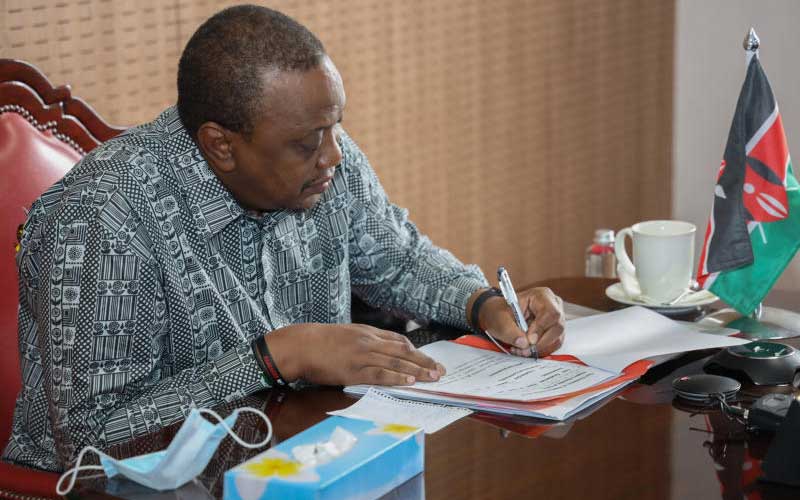 President Uhuru Kenyatta (pictured) has told governors that the decision to re-open the country's economy will be informed by the level of preparedness by the devolved units to respond to Covid-19 infections. The President said the decision will largely be determined by the counties capacity to effectively respond to new cases of Covid-19 imported into their territories. "County readiness to respond to new imported cases of infection will largely determine our national readiness to re-open the country as a whole.

"I say this because the nation is the sum total of all the 47 counties. If the counties have met the necessary thresholds, then the nation will be ready to re-open," he said. The President spoke today during a virtual meeting of the national and county governments coordinating summit that was also attended by Deputy President Dr William Ruto and representatives of religious and business sectors. During the extra-ordinary summit, also addressed by Health CS Mutahi Kagwe and his Education counterpart Prof George Magoha, a progress report on the roll out of the minimum Covid-19 response measures required ahead of the re-opening of the economy was presented. The progress report was presented by Kakamega Governor Wycliffe Oparanya who is also the current chairperson of the Council of Governors. In his report, Governor Oparanya said counties had attained a total of 6,898 isolation beds against the national target of 30,500 units.

He said, 12 counties had met the 300 per county isolation beds threshold while 34 devolved units were on course to meet the target within the month. On human resources, Governor Oparanya reported that a total of 16,914 health personnel had been trained on Covid-19 management among them 59,449 community health volunteers. Speaking on behalf of the 47 County Governments, the Kakamega Governor said 36 counties have a cumulative sum of 343 ICU beds while 28 counties have a total of 337 ventilators. He said the Council of Governors (CoG) working with the Ministry of Health and partners had developed a guideline on home-based Covid-19 management which is being rolled out. Governor Oparanya thanked the President for his frontline role in the fight against Covid-19 saying the Head of State's intervention had helped speed up response preparedness by counties.

"Through your directive that allowed County Governments to procure non-pharmaceuticals from other agencies, Counties have enhanced their response measures," Governor Oparanya said. Mr Oparanya said CoG supports the gradual re-opening of the economy subject to the setting up of a strict regime of Covid-19 containment protocols for businesses, places of worship and inter-county travel. "We propose that a multi-agency approach is applied on disease containment through improvement of testing capacity; contact tracing and enforcing the social distancing mechanisms. "The reopening of the economy will have a county specific context. This will consider the county specific sector priorities and the health system ability to cope," Governor Oparanya advised. Health CS Mutahi Kagwe said Covid-19 infections in the country were on the rise and advised against re-opening of the economy before the response preparedness threshold agreed upon is fully met. He said countries that had rushed to re-open their economies without having proper Covid-9 containment protocols in place were experiencing an upsurge in new infections. The Health CS urged counties to speed up the recruitment of the 8000 health workers under the Universal Health Coverage (UHC) program so as to boost the country's Covid-19 response capability. Deputy President Dr William Ruto supported the President's proposal for progressive reopening of economy and urged counties to speed up the implementation of Covid-19 containment measures.