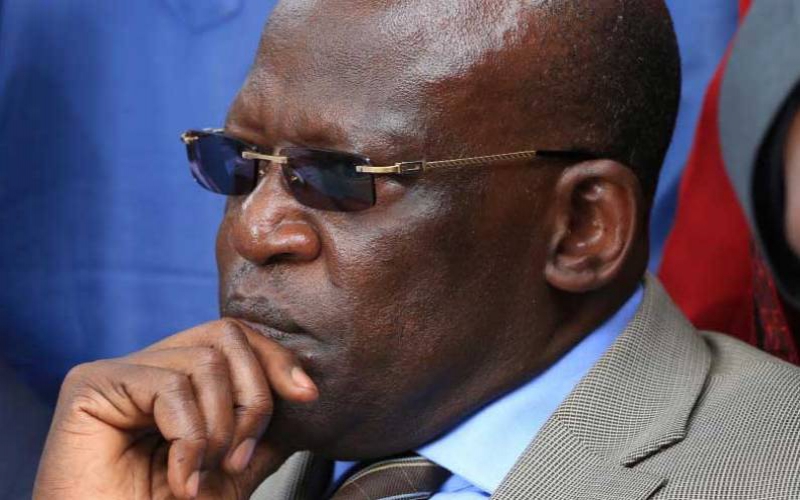 Former Machakos Senator Johnstone Muthama now says he will not be threatened to follow a political cause he does not believe in. Just a day after the Wiper Party asked the former Senator to show cause in the next fourteen days over what is seen to have been caused by his recent support for Deputy President William Ruto’s 2022 presidential bid. “I am still working to ensure DP William Ruto becomes the 5th president of the Republic of Kenya, “said the former legislator.

Muthama added that his decision had been informed from a deep thought of the political future of the Kamba community.  He alleged that his party leader, Kalonzo Musyoka, had dropped his presidential ambition for another candidate. Yesterday, the party chairperson Chirau Ali Mwakwere put the leader on notice for gross misconduct, including insubordination of the party leader and the party’s political position. “He is off track and is doing things the party cannot stomach. No one has actually given him that role of speaking on behalf of the party,” said Mwakwere. The party statement also continued to give details about why the veteran politician was supposed to face the disciplinary committee in person.

"Wiper Democratic Movement-Kenya has initiated disciplinary proceedings against former Machakos Senator Johnstone Muthama over alleged insubordination and defiance to the party's ideologies,” read the letter in part. Muthama seems to be in the bad books of the party since late last year, which saw a section of Wiper leaders demand his exit.  Similarly, he is also accused of failing to obey the rules of the party as well as attempting to split the Kamba community. According to Mwakwere, Muthama has for the last six months made public sentiments that were not linked to the party nor had the party leader approval. “Everything that he has said to the public for that period was not official and should be deleted and done away with," Mwakwere said.

“Muthama has received a verbal warning from us. We even took the trouble and visited him in his office, but it seems he did not listen,” said the Wiper party chair.  "We only go this far if the red line is crossed. In this case, it was crossed.” Wiper deputy party leader Farah Maalim said the provisions of the party must be respected irrespective of the position held by any leader. “Indiscipline will not be tolerated in the party. We are disappointed in his behavior,” said Maalim. The current move by the party comes barely a month after Jubilee Party held a disciplinary hearing against perceived party dissidents, which saw nominated senators subjected to public grilling. The developments come as party purges continue in the country. The Jubilee Party has particularly been in thorough house cleaning activities to weed out members whom the party termed disloyal.  The recent casualty being Garissa Township Member of Parliament Aden Dwale who was replaced at the National Assembly Majority Leader position. Before Dwale’s ouster, other legislators allied to the Deputy President William Ruto were also axed, as the political circus continues to gain momentum. Senate leaders Kithure Kindiki (Deputy Speaker), Kipchumba Murkomen (Majority Leader), and Majority Whip Susan Kihika, were first ejected. This was followed by the removal of National Assembly Majority Whip Ben Washiali and his deputy Cecily Mbarire and the removal from Parliamentary Committees of 21 MPs. The former Machakos Senator is said to have neglected his duties as a representative of the Wiper, as well as abandoning the party by not visiting the new party offices in Karen. Suffice to mention is that Governor Kibwana was in July last year ousted as the party chairperson and replaced by Chirau Ali Mwakwere.