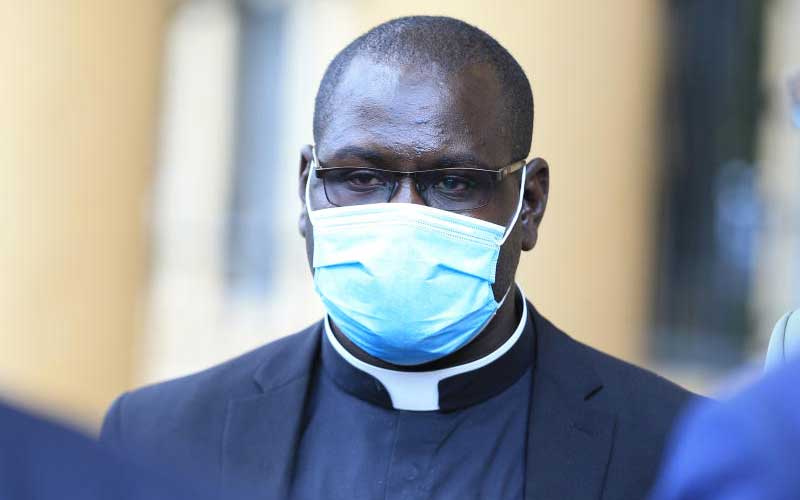 A Catholic priest accused of spreading coronavirus has been slapped with a 14-day mandatory quarantine after being released from police custody.

The decision by Nairobi Senior Principal Magistrate Martha Nanzushi was a double punishment for Richard Onyango (pictured above), having recovered from the virus after being hospitalised at Kenyatta National Hospital for three weeks and dragged to court to face charges of spreading the disease.

“He would not have not been charged had he quarantined himself according to government directives. I, therefore, order that the accused attend a mandatory quarantine for 14 days which he failed to do when he arrived in the country from Italy,” ruled Ms Nanzushi.

The magistrate also granted the priest Sh150,000 cash bail after being charged with the offence of spreading coronavirus between March 12 when he arrived from Italy to March 20, when he was taken to KNH and tested positive for the virus.

The charges stated that Fr Onyango put the lives of many people he came into contact with at risk by refusing to go into quarantine on arrival from Rome, Italy.

He was arrested last Friday after testing negative for the virus and arraigned on Tuesday.

Nanzushi dismissed an application by the priest’s lawyers that he had already gone through quarantine when he was hospitalised at KNH.

She directed that the priest be taken to a government-run quarantine facility at St Joseph's Assisi House in Nairobi.

Sharp rise in new Covid-19 cases, 14 patients have died in the last 24hrs

Why Kisumu's hospitals are ticking time-bombs

By Hudson Gumbihi | 1 day ago

Disabled man to be compensated for unfair dismissal by insurance company

By Rose Mukonyo | 1 day ago

By Phares Mutembei | 1 day ago