Ndingi, a shining beacon of integrity in troubled times 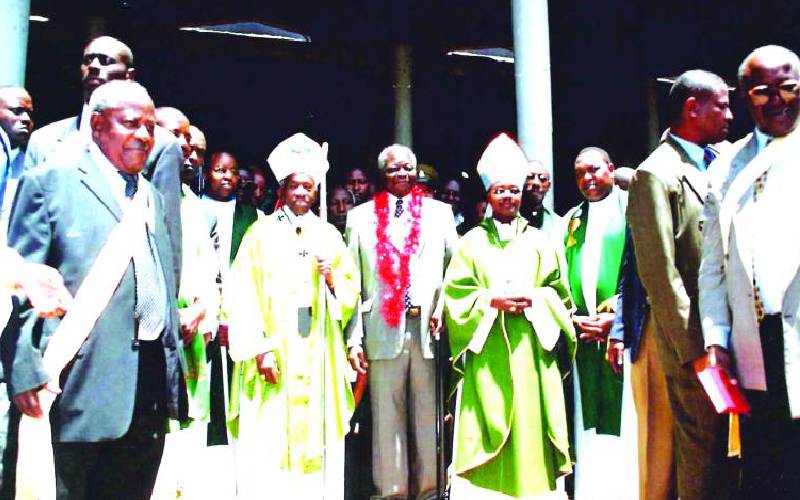 Archbishop Raphael Ndingi Mwana a’Nzeki is an icon, a father, a patriot, a true shepherd of Christ’s flock.

Tributes often are written in the past tense, and yet the very basis of our faith speaks of the everlasting present where we hope to live with our God, our destiny.

Yesterday, our beloved shepherd left this earthly abode to the home of our eternal father. For many years, he pointed the way to us, he walked it and now completes it, receiving the eternal embrace of our creator and father.

Indeed, you have fought a good fight to the end. You have run the race to the finish. You have kept the faith.

Emeritus Archbishop Mwana a’Nzeki symbolised the maturity of the local Catholic Church. He was one of 12 bishops ordained by Pope Paul VI in the first trip of the Roman pontiff to Africa. This was during the canonisation of the Ugandan martyrs on October 18, 1964.

Young, energetic and learned, he soon got busy in starting a new diocese, and with Maurice Cardinal Otunga and Bishop Caesar Gatimu, set forth in laying the foundation of the indigenous leadership of the Catholic Church in Kenya.

For those who would come later in church leadership, he had concise and demanding counsel: we have a long way to lead our people to grow in faith, don’t fear to challenge, don’t fear difficulties, pray over every decision and remember Christ must be your anchor.

We all treasure the small or big counsels he would offer simply, including not exaggerating difficulties. Carry your cross gracefully. In his last years, like St John Paul II, he has shown us also how to carry sickness and old age with grace and humility. It was not easy to see him, who was a dynamo, so reduced by ill health. And yet it was an added lesson for all of us to learn.

Small in stature but with an immense heart and a powerful will, with a resolve and decisiveness that knows no barriers. Any plight of a poor man became his problem, and he would happily share the little he was carrying to allay the need of someone he met on the street. He had the patience to listen to the story of a person with no status and make him feel as important as the high and mighty.

I personally experienced this while I was just a 24-year-old who had sought his appointment, where he even invited me for lunch. His advice was deep and focused to the young and old alike, and to the great and small, too. A true icon of Christ.

His sense of integrity made him totally uncompromising with evil, mediocrity or shoddy work, or worse still, with those who mistreated the poor or needy or were untruthful. His expectations of the clergy would be high, that they be fully available to the flock. So, he demanded and led by example. A great son of our church, a great shepherd, a great Kenyan patriot.

How can we not recall his unwavering fight for the rights of the marginalised, the displaced, and his concern for the victims of tribal clashes? He was convinced of his God-given mission, and when he spoke on their behalf, he spoke as one with authority no matter who he was speaking to. He was truly fearless because he fully trusted God and sought nothing personal but the good of the people, fulfilling his mandate by the master.

While he was still healthy, he never missed the New Year celebration, which he would host in his home village in Mwala. He said we would be celebrating his birthday and priestly ordination, and yet he really never knew his date of birth. Many of us think he may have been a good five years older. In this way, he remained always close to his family and village.

It was a simple celebration where he would have a message of encouragement for the largely local congregation. A true family get-together. There, one was able to admire his inspiring humility and simplicity.

I wonder what the Holy Ghost priest saw in him as a boy, when he encouraged him to become a priest. What that missionary never realised was the great legacy he was giving a young church and a young nation. That man, who in his last years could barely speak, overcome by sickness and old age, still had in his heart the fire he found in the faith he received as a youngster. He was a deeply convinced follower of Christ. He would invite some of those who brought problems to him to pray together in the chapel or church.

He believed in the power of prayer, and drew that courage and conviction from his prayer and closeness to Jesus Christ, especially in the Holy Eucharist. All his life and energy was about serving God, living his calling as a priest, and serving and loving his neighbours, his flock. How many Christians he must have given confirmation. How many baptised. How many priests he ordained. How many hearts he touched. But above all, how many he showed the path to God.

He was a fighter, a soldier, a warrior for Christ. And now all we can ask him is to bequeath on us those weapons of war that made him victorious: prayer, integrity and love for the poor. Rest in peace, our dear father and true Kenyan.

Archbishop Anthony Muheria is the Catholic Archbishop of Nyeri

He was one of the clergymen who played an active role in the struggle for the reintroduction of multiparty democracy in Kenya.

By Jacinta Mutura | 27 minutes ago

By Augustine Oduor | 1 day ago

By Collins Kweyu | 1 day ago

By Collins Kweyu | 1 day ago