KMPDU says doctors have not received risk allowances as promised

The Kenya Medical Practitioner and Dentists Union now says that their members are yet to receive the welfare package that was promised by President Uhuru Kenyatta.

Speaking during a weekly press briefing, the Union has decried the slow nature in which the funds are being processed by the government.

“More than a month now, we have not yet received the monies promised by the Salaries and Remunerations Commission (SRC). This is not just a concern but a demand that the government honors its pledge, “said Dr. Mwachonda Chibanzi, the Acting Secretary General KMPDU.

The leaders however lauded the steps that Machakos County is undertaking by making sure the healthcare workers, who are on the first line of defense against Covid-19 are well remunerated.

Similarly, KMPDU has urged Counties to increase the number of isolation beds to the minimum 300 beds as directed by the Ministry of Health. This including improvising with quality Jua kali beds. 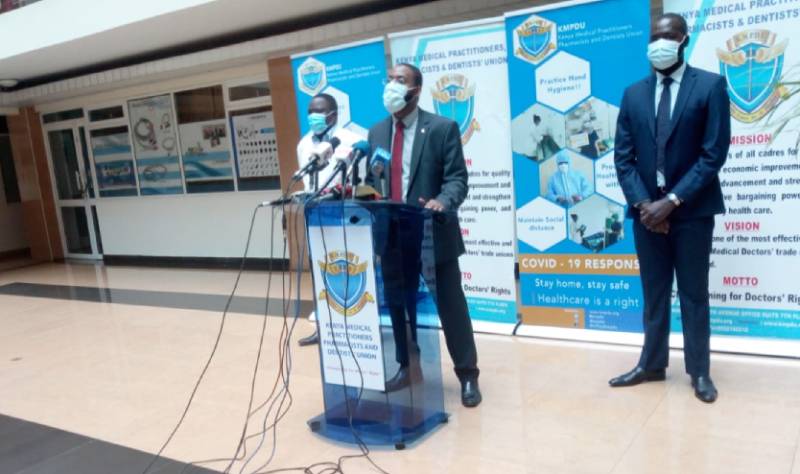 “As it stands, our Counties are ill-prepared to handle coronavirus pandemic. We ask the Counties to speed up the implementation of this directive by the Covid-19 response Committee, “added Dr. Mwachonda.

The Health Cabinet Secretary Mutahi Kagwe yesterday issued a directive that all counties should have a minimum of 300 beds in their isolation wards.

This came after it emerged that many Counties do not have the necessary facilities to handle a possible surge in the coronavirus numbers.

“Counties are hereby given 14 days to make sure they have at least 300 beds for isolation of Covid-19 patients, “directed CS Kagwe

The CS noted that many Counties are still lagging behind in preparations for spiking Covid-19 numbers. This was also an extension of President Uhuru Kenyatta’s observation.

“If there is a surge in infections in these two counties, their healthcare systems will be overwhelmed, so the counties must move with speed to have at least 300 beds since it is just a matter of times before it explodes,” the President said. Responding to the claims by KMPDU, the Health Chief Administrative Secretary (CAS) Dr. Rashid Aman said the officials were being engaged in the processes of allocating the allowances. “We are working with their officials to make sure they get the allowances soonest. We, therefore, urge them to be calm and wait as we finalize,” said Dr. Aman

The Salaries and Remunerations Commission (SRC) had earlier approved the disbursement of Sh 3 billion, following the directive from President Kenyatta. “The Salaries and Remuneration Commission deliberated on the matter during its special meeting incognizant of the challenges faced by the healthcare workers and approved Covid-19 medical emergency allowance and benefits for the frontline healthcare workers as estimated to cost Sh 3.3billion for a period of three months with effect from 1st April, 2020, subject to availability of funds,” said the commission. This came after the President in efforts to motivate the health workers who are in the frontline war on Covid-19, directed that the health professionals get risk allowances during the Covid-19 crisis. Medics had previously threatened to withdraw their services if the government does not guarantee their safety or consider cushioning them. This included strike notices, as they decried lack of Personal Protective Equipment (PPEs), which put them at risk of getting infected. Over 83 health workers have since been infected by coronavirus while attending to patients.

Additionally, leaders of National Nurses Association of Kenya, Kenya National Union of Nurses (KNUN), Kenya Union of Clinical Officers (KUCO), Kenya National Union of Medical Laboratory Officers and the Kenya National Union of Pharmaceutical Technologists had demanded a fair appraisal and promotion system applicable to all health workers. “We have said for a long time that the Ministry of Health is not taking all like people who are contributing to the healthcare services... Yesterday we got information that the Ministry of Health, which is run by 99 percent doctors, had promoted 200 doctors,” KNUN Secretary-General Seth Panyako said at the joint Press conference at Railways Club, Nairobi. The demands also included job promotions, with allegations that some health workers had stalled in one job group for years, yet their qualifications spoke for them. “The ones constantly with patients on the ground are the ones earning the least and never being promoted. Those up there keep getting hefty appraisal packages. The President gave a health package for health workers. Why haven’t we seen its benefits?” he added. Likewise, the medics had rejected the offer from SRC terming it unfair. They also questioned the rationale of the allocation of the money.

“We reject the circular by the Salaries and Remuneration Commission in totality…We are the ones who are constantly with patients on the ground and are the ones earning the least and never being promoted. Those up there keep getting hefty appraisal packages. The President gave a health package for health workers. Why haven’t we seen its benefits?” posed Panyako.  The medics, however, took U-turn, suspending their strike, in mid last month, after the Ministry of Health agreed to sit down with them, and discuss their issues. "The Government has accepted to sit down with us to discuss our issues. We have therefore suspended the strike for 21 days. We have, however, not called it off. If the conciliation process does not yield to our demands, then we will proceed for the nationwide strike after the 21 days, “said Panyako. The leaders, however, warned that they would not hesitate to go to the streets if nothing comes out of their negotiations with the government. “If the Government fails to honor its other side of the bargain, then we will resume the strike. But for now, we have accepted their request to have us on the negotiation table, “stated Gibore. The sentiments were also backed by the chairman of the Kenya Health Professionals Society (KHPS) Mohammed Duba, who explained the reasons for the suspension of the strike. “We are in solidarity with the healthcare workers on the suspension of the strike. This follows a fruitful engagement between us and the Ministry of Health on Friday, May 15 and we expect to have more engagements with the said Ministry, the Ministry of Labour, and the Council of Governors starting tomorrow (Monday), “added Duba.