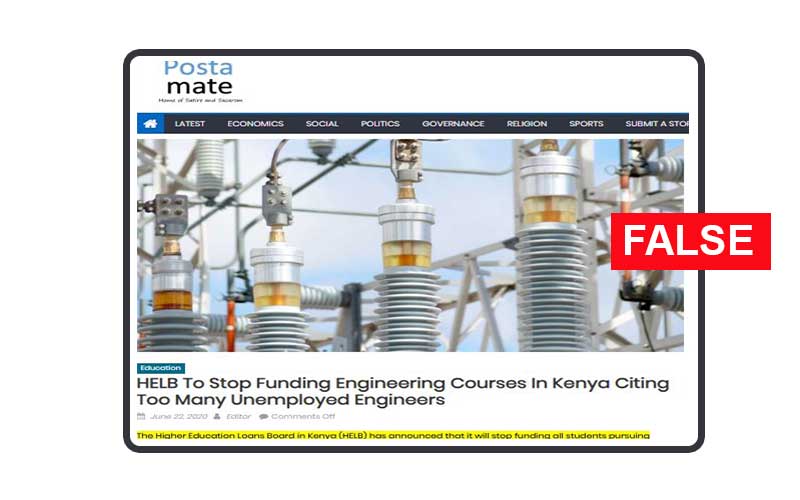 A story shared hundreds of times in multiple Facebook, Twitter and WhatsApp posts claims that the Higher Education Loans Board (Helb) will suspend funding for engineering courses in Kenya. The claim is False; it originated from a satirical website. Satire, often if not properly attributed to the original publisher when shared – as was the case with this claim – gives the impression of a news report.

Moreover, the line between satire and misinformation is thin and often reduces as the information moves further away from its source, giving space to numerous misinterpretations. The story was first published here by Postamate, a satirical website, on June 22.  It claimed Helb had cited "a market glut and lack of meaningful Return on Investment for the courses." Postamate further sensationally claimed that 97 per cent of all engineering graduates are either unemployed, in self-employment, or employed in totally unrelated fields. "Why waste five years pursuing calculus and other complex things that will not be used anywhere? We are being unfair to these kids and we would rather tell them the truth," the website quoted an unnamed person. According to a report titled 'State of Graduate Employability in Kenya' by CPS International released in May 2019, the second most employed graduates in Kenya did engineering.

The study showed the most employed graduates, 46.7 per cent, were from business and economic studies, with 11.1 per cent from engineering and 8.9 per cent from medical studies. ICT and natural sciences accounted for 6.7 per cent of graduates while art and design accounted for 4.4 per cent while 2.2 per cent are from law, humanities and others. The false funding claim was also published by the news app Opera News here under the headline: "Big blow to engineering student's as Helb makes its stand." "This means engineering students to shift to other courses or struggle for their own in order to get education in the field they will take (sic),"it reported, attribution the information to the Helb board and a Twitter user. "Notorious website"

The head of corporate communication at Helb Wavi Mungala told Standard Digital Fact Check desk that they did not issue any directive suspending loans for engineering students. "The site that carried this unfortunate story is clearly notorious for fake stories not just about HELB but also about other institutions," she said. Helb also, on June 23, shared a screenshot of Postamate’s article on Twitter and warned of fraudsters. "Please note that any communication on matters HELB is done on official channels," it said.

Please note that any communication on matters HELB is done on official channels. Beware of fraudsters! pic.twitter.com/wvcBU6MHsH

Helb implored the public to reach out to them through their official communication channels to verify information they doubted. This is an initiative of the Standard Group to combat fake news, misinformation and disinformation. If there’s something you want us to look into, mail factcheck@standardmedia.co.ke