Politics
Prof Kindiki affirmed that he was waiting for Kang'ata to serve him with the charges. 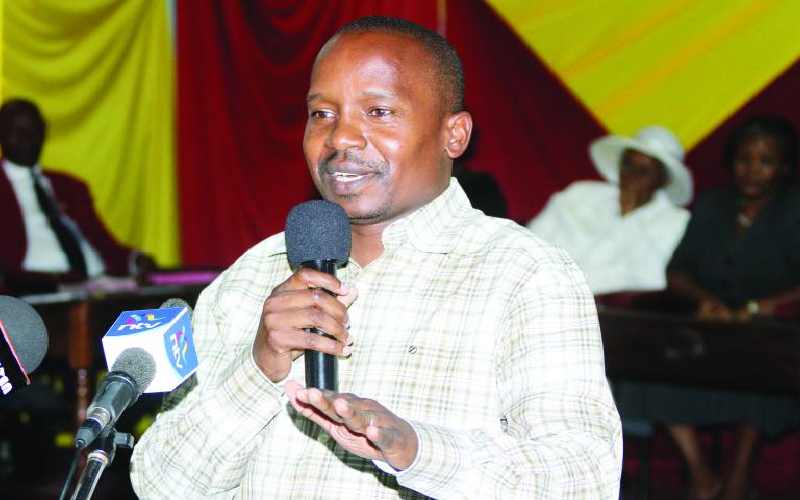 The fate of Senator Kithure Kindiki (pictured) as Senate deputy speaker had by last evening been sealed after 51 members signed to support a motion to kick him out.  Senate Majority Whip Irungu Kang'ata gave a notice of motion for the removal of Kindiki amid reports that at least two senators approached to replace him had declined the offer. The Standard established that 51 senators - from Jubilee Party and Opposition coalition NASA - had signed to support the motion.

Jubilee Party kicked off the process of removing the Tharaka Nithi Senator days after dethroning Kipchumba Murkomen as Leader of Majority in the House. Senators were divided on grounds advanced by Jubilee Party to oust the deputy speaker even as sources said senators from other parties felt that a position of deputy speaker should not be used to settle Jubilee factional wars. At the time of moving the Motion, Margaret Kamar (Uasin Gishu) and Johnstone Sakaja had reportedly turned down offers to take up the position once Kindiki is ousted forcing Jubilee honchos to approach ODM's Stewart Madzayo (Kilifi) and Judy Pareno (nominated). Asked whether he had been offered the post, Sakaja replied: ''Yes. Not interested in the position." The Standard saw a senior State House official who is a close ally of the President in Parliament in the morning before Kang'ata moved the notice in the afternoon. His presence, according to inside sources, was to lobby senators to back the initiative. Sources also said the top official was there to convince Kindiki to apologise for his alleged 'sins' but he was adamant.

The impeachment motion is a continuation of Uhuru’s onslaught against allies of his deputy William Ruto as it comes hot on the heels of the dramatic ouster of Murkomen and Nakuru’s Susan Kihika as Majority Whip respectively, last week. “I beg to move that this House resolves to remove from office of the Deputy Speaker of Senate, Prof Kindiki,” stated the motion by Kang'ata. Temporary speaker Prof Margaret Kamar, however, directed that the debate on the matter be re-schedule for another day. According to Kang’ata, failure by Kindiki to attend State House meeting amounted to gross insubordination. He is also accused by the party for going against Uhuru’s move to take over key operations of Nairobi City County through the Nairobi Metropolitan Service (NMS) by allowing a motion by Murkomen to challenge the decision. But some senators reportedly felt the grounds spelled for his ouster were flimsy and merely pushed because he had skipped a Jubilee Parliamentary Group (PG) convened by President  Kenyatta at State House.

The embattled Tharaka Nithi Senator is also faulted for ordering an investigation into the President’s conduct in the take-over process. The matter was committed to the joint committees of Devolution and Justice and Legal Affairs chaired by Senators Joseph Kinyua (Laikipia) and Samson Cherargei (Nandi), both Ruto allies. The probe was, however, blocked by Senate Speaker Ken Lusaka, as the outcome was feared would have poked holes on the President decision in taking over the running of the county from Governor Mike Sonko, perceived to be another Ruto ally. The Senate legal department has also halted the probe following Lusaka’s decision. A senior party official said: “You cannot ignore the party leader when he calls for a meeting and you don’t send apology. You issue orders against the President.” “Lusaka reversed the order to probe NMS takeover. He is also very arrogant and interrupts senators blocking them from speaking,” added the source, referring to the motion hostile to the government takeover of Nairobi and installation of NMS to run affairs of the capital. Moving motion Surprisingly, as at the time of moving the motion at 2.41pm in the Senate, Kang'ata was yet to furnish Kindiki with the grounds for his removal as stipulated in the Standing Orders. Prof Kindiki affirmed that he was waiting for Kang'ata to serve him with the charges. According to the Standing Orders, the deputy speaker can be fired on grounds of serious violation of a provision of the Constitution or of any other law including a violation of Chapter Six, gross misconduct, whether in the performance of the DS’s functions or otherwise. Others include, physical or mental incapacity to perform the functions of office, incompetence or bankruptcy. Kindiki rose to fame in the run-up to the 2013 elections when he led a team of lawyers who drafted the Jubilee constitution which brought together Uhuru’s TNA and Ruto’s United Republican Party (URP).