I will reach out to all leaders and heal rift in Jubilee, says Poghisio 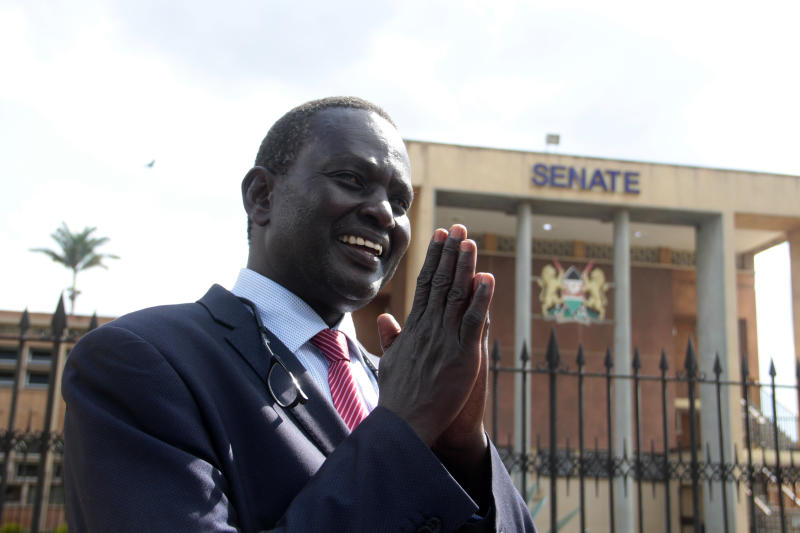 Incoming Leader of Majority in the Senate Samuel Poghisio (pictured) says uniting his team will be one of his priorities as he settles into his new office next week. Mr Poghisio, who replaced Elgeyo Marakwet Senator Kipchumba Murkomen, will now lead the ruling party agenda in the Senate. In his first interview with The Sunday Standard since he was thrust to the top leadership of Jubilee Party in the Senate, the West Pokot senator acknowledged that his majority side was deeply divided and needed healing.

He is, however, confident that his experience both inside and outside government will help him succeed in his work. “I have a long time experience, this will come in handy. I have been in government, I have been a legislator for many years. I have been able to cultivate a rapport that I now hope will help me succeed in my new assignment,” said Poghisio. The first-term senator, whose new role elicited controversy, thanked President Uhuru Kenyatta for selecting him to the position. Soft-spoken and with impeccable English, the senator who has been in politics for three decades will be expected to champion the ruling party’s business in the Senate, a task he says he is equal to. He will have to convince over 20 senators allied to Deputy President William Ruto for him to be able to achieve much in his quest to deliver for the ruling party.

“I will reach out to each one of them. I will also speak to the Deputy President to have him make it smooth for me to deliver. In any case, I will be doing bidding for his ruling party and thereby helping in his responsibility,” said Poghisio. Lost seat The legislator, who first started the long and winding journey of politics in 1988 when he won the Kacheliba constituency seat on a Kanu ticket, lost his seat months later when was expelled by the independence party alongside the late Francis Lotodo who was his Kapenguria constituency counterpart. The two MPs had accused the government of marginalising Pokot community. Eleven years later, the MP made a strong comeback by trouncing Peter Nang’ole in 1997. He would later retain the seat in 2002 on a Kanu ticket.

Since then, Poghisio with two Masters degrees – one in communication from Wheaton College in the US and another in Philosophy/ Theology from Lincoln University in the UK – and a former lecturer a Daystar University boasts having been a chair of ODM Kenya, a Minister for Information, and later legislator allied to Ruto’s United Republican Party (URP). He said he enjoyed a cordial relationship with President Kenyatta who he has worked with for over two decades and was looking forward to helping him deliver on his legacy projects through his performance in the Senate. Shadow government He said he had worked with Uhuru in his shadow government and also served with him at the Sky Team when they were campaigning for 2013 presidential elections. He asked his predecessor to join hands with him and help the ruling party in its mandate. “Let bygones be bygones. As leaders, we should have a big heart and let go of certain things. Let’s bring people together. I request Murkomen and Ms Kihika to join hands with me,” said Poghisio. He said he will strive to work hard and be on top of things at the House so that he does not let anything that would hurt the government pass. “I believe as a leader of majority, you should be on top of things so that you do not let anything sinister pass while at the same time ensuring that the government business carries the day,” said the senator.